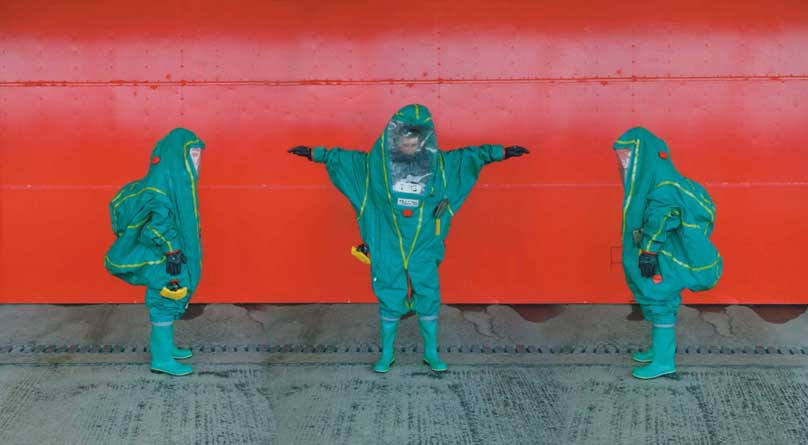 Sculptor and photographer Michael Sanders is a UK based artist working from a former military airfield in Lincolnshire, England. His practice often subverts the everyday: as the blundering nuclear tourist he makes gentle interventions at former Cold War and nuclear sites, using tartan and textiles to challenge and re-appropriate the imagery and symbolism of military power and technology.

My work in engineering has given me a particular insight into the good and bad sides of technology, a prominent theme throughout my artistic practice.

Michael’s work has been shown in Cuba, Europe and the USA, including Cobra 1.7 – Cobra Res, 71a Gallery, London, A Focus For Memory – The Collection and Usher Gallery, Lincoln, Subversive Design – Brighton Museum and Art Gallery, ‘The Receiving End‘, a site specific performance at RAF Wainfleet Air Weapons Range during the SEAS Festival in 2009, and ‘Ruin – An investigation into future archaeology‘, a collaborative exhibition with Walter Cotten at the Kruglak Gallery, Oceanside, California in 2008.


He was featured in ‘Target Practice‘, a programme for BBC Radio4 made in collaboration with producer Kate Burningham, on location at RAF Holbeach, a bombing range on the Lincolnshire Wash that is used by British, American and European squadrons for training purposes.

In 2011 he was awarded the OPEM Purchase/Commission Prize sponsored by the Heslam Trust.

He is currently developing a range of mildly seditious products using his own brand Drone County.