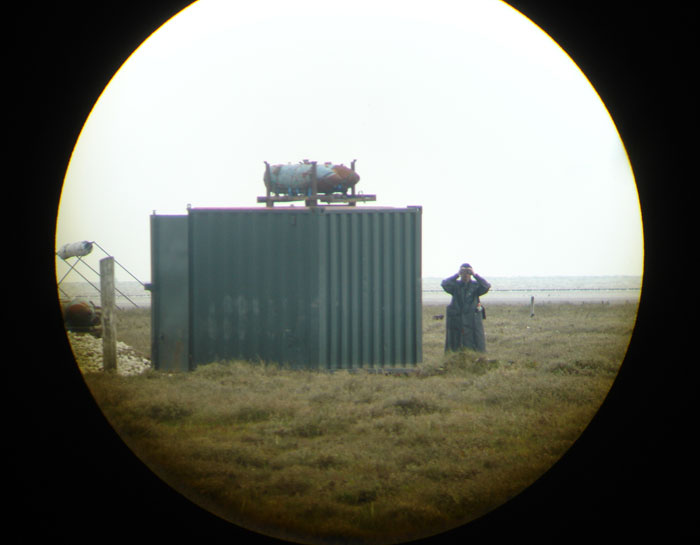 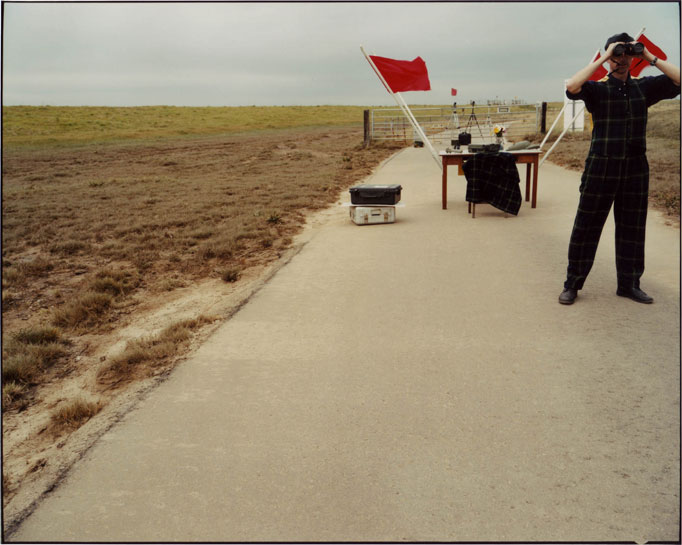 On 2 October 2009 Michael Sanders performed ‘The Receiving End’ as part of the SEAS International Arts Festival in Skegness.

An invited audience standing outside the fence at RAF Wainfleet Air Weapons Range watched ‘the nuclear tourist’ through viewing devices and telescopes as he carried out an on site inspection and set up his mobile office inside the red flagged danger area of the bombing range. This took place outside flying hours and after the range had been declared safe by the explosives and ordnance disposal team.

In order to temporarily reclaim a small area of this restricted space Michael set out his own red flags, in an attempt to exploit the principle used in mathematics that a negative times a negative becomes a positive.

One month later, RAF Wainfleet was permanently closed in a round of military spending cuts. Just before 14:36 GMT on 2 December an invited audience watched as a ceremonial ‘last bomb’ was dropped onto the bombing range. The station flag was then lowered for the final time

There is no direct connection between these two events. The red flags on the boundaries of the Wainfleet range danger area will continue to be flown by the Ministry of Defence until the land is remediated and made safe.

Special thanks to the following for their help with this project: Nicola Streeten, Jane Wright, Adam Wright, Nicki Gardner, the staff at Gibraltar Point Nature Reserve, Ramco UK Ltd, John Aspinall at Defence Training Estate and all the staff at RAF Wainfleet.