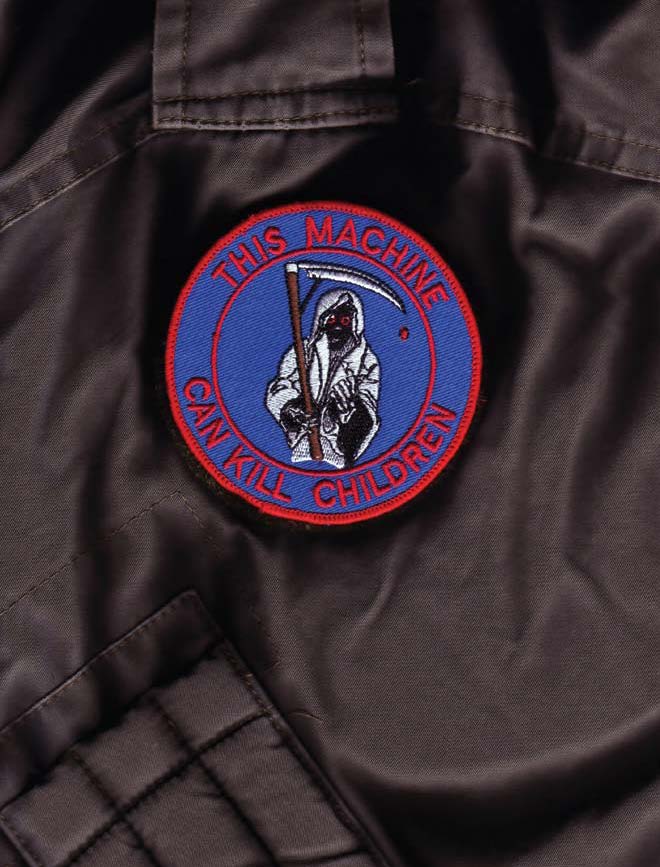 I made this gentle intervention at the RAF Waddington Air show in July 2011. Waddington is the home of 39 Squadron, whose pilots operate joint British and American drone flights in Afghanistan from Nevada. The remotely piloted aircraft (RPA’s or Reapers) are used for reconnaissance and can be equipped with missiles and laser-guided bombs for ground attack. The use by the USA of these aircraft has been linked to the extra-judicial killing of Al Qaeda suspects.

By placing myself in the role of ‘outside observer’ and ‘air show spectator’ (wearing wannabe aircrew getup and my own design of ‘Grim Reaper’ squadron patch), I hope to highlight the uncritical enthusiasm of the crowd for the military technology on display in the spectacle of this family event. I feel it raises uneasy questions about distance killing and our ability to fight war at far remove.

This work stems from my increasing frustration with the continued involvement of our armed forces in the war in Afghanistan, with the rising toll of deaths and serious injuries both among our troops and the civilian population caught up in the conflict.

Carrying on our everyday lives while a war is being fought in our name, thousands of miles away, reminds me of the pilot who can one moment be remotely flying a combat mission then driving home to his family in Las Vegas the next.

There is a case for using drone aircraft with pilots away from physical danger. They have the back up of intelligence teams who can assess targets and minimise the risks of so-called ‘collateral damage’. However, there is increasing concern that these unseen threats from above cause great civilian distress in conflict zones.